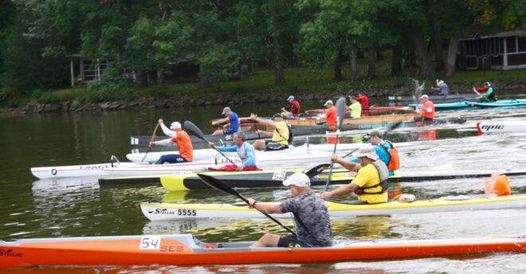 The IPC is a proud sponsor of recreational canoe and kayak racing in Illinois. We help to get the word out about racing and racing season but also track points and award trophies to cumulative race winners for the racing season for that year.

The seven annual sanctioned races include the St Charles Current Buster, which usually opens racing season, the oldest and most established race, the Des Plaines River Marathon, the Mid American Race from Aurora to St. Charles, the Voyageur Landing Race in Elgin, the Pontiac Canoe and Kayak Race on the Vermillion River, the Vic Hopp Race on the Fox (not run this year), and the St. Charles Fall classic.

Points are awarded with ten points for every first place finish, nine points for a second place finish, eight for third and so on down to zero depending on finish order. A qualified racer has to complete at least 4 out of the seven races (or in the case of this year, six races). If a person competes in more than four, then their best 4 races count for the point total. Points are tallied for the best of four sanctioned races and the person with the most overall points is the overall Statewide Paddling Champion!

Trophies for the winners will be handed at this year’s Gathering of the Paddlers in Kankakee, Illinois on November 5. Don’t miss this event. Read more about our dinner in the Updates from the IPC.